The Fault in Our Tolerance: Accounting for Failures in React

Building modern web apps is a complex process with a lot of moving parts. Sometimes these moving parts come to a halt and things start breaking.

We do what we can to prevent this from happening, but the reality is that we’ll never be entirely error-free. That means we should always expect that things will sometimes break in unexpected ways, and we need to be able to handle that gracefully.

In other words, we need fault tolerance:

Fault tolerance is the property that enables a system to continue operating properly in the event of the failure of some (one or more faults within) of its components.

In my experience fault tolerance is often overlooked and undervalued in web apps. We might have hundreds of tests that give us confidence that things probably won’t break, but we don’t take the same time to consider what happens when some inevitable failure happens. This is especially important if high availability is a priority (and it often is).

So how do we enable our React application to be fault tolerant?

The short answer is error boundaries. Currently the API is only available in class components and it looks something like:

An error boundary in React is just a class component with the componentDidCatch method. If you want a nice starting point check out react-error-boundary.

The React docs do a great job of explaining what error boundaries are and how to use them, so I don’t want to dwell on that. Go read the official docs first and come back if you want a good overview of the basics.

First let’s look at the two extremes so we can see what their downsides are.

The first extreme: a single error boundary, right at the top of your application.

This is probably close to what most people do. It’s essentially the same thing that happens when server-rendered applications fail. It’s not a terrible experience either, it’s just not the best we can do. The problem is that when one thing fails, everything else fails with it.

This approach would make sense if a failure in any part of your application meant that the entire thing was unusable. There are definitely some cases where this is true, but I don’t think it’s the common case.

Going back to the definition of fault tolerance:

We can see that a single error boundary doesn’t really give us fault tolerance either since a single failure brings down the whole application.

Too Many Error Boundaries

Moving to the other extreme, you could try and wrap every component in an error boundary. The problems with this approach are more subtle so let’s look at a more detailed example to see why this can be worse than a single error boundary.

Imagine we have this <CheckoutForm /> component that lets users see whats in their cart, enter their credit card info, and make their purchase.

Now lets wrap every component here in an error boundary

At first blush this might seem like a fine idea; the more granular your error boundaries are the less impact a single failure has on the application as a whole. That sounds like fault tolerance! The problem with this is that minimizing the effect of an error isn’t the same as being fault tolerant.

Pretend something in the CreditCardInput component broke.

If we break down what this would mean for the user experience (UX) we can see that this might put our users in a world of hurt.

I’m betting even the author of these components wouldn’t know what would happen in this case—let alone the user. This is likely to be confusing and frustrating for them.

The degree to which this is frustrating and confusing also depends on what you render as your fallback. Does the component just pop off the screen without warning? That would be really confusing to almost everyone.

If not, you’re probably using a shared fallback UI. Maybe it renders a sad face with some helpful information about the error. This is better than nothing, but if you’re wrapping every component in this error boundary it means this fallback has to render correctly for every possible UI element. This is near impossible to do right, since different elements have different layout requirements. A fallback that is good for a page-level section like a header is bad for a small icon button, and vice-versa.

Hopefully the problem(s) are apparent: wrapping every component in an error boundary can lead to a confusing and broken user experience. It often puts your application into an inconsistent state that can frustrate and confuse users. It’s interesting to note that avoiding “corrupted state” is actually one of the main reasons that error boundaries even exist in the first place:

We debated this decision, but in our experience it is worse to leave corrupted UI in place than to completely remove it

Error boundaries also come with some inherent overhead, so overusing them can negatively affect performance. This should only be a problem if you use them everywhere, so don’t let this scare you away from using them all together.

The Right Amount of Error Boundaries

There is no universal definition of a “feature” that we can use to look at arbitrary apps and identify their boundaries. I know it when I see it is usually the best we can do, but there are some common patterns that you can use as guidelines.

Most applications are made up of individual sections that get composed together. A header, navigation, main content, sidebars, footers, etc. Each of them contribute to the user experience as a whole, but they retain a certain level of independence. 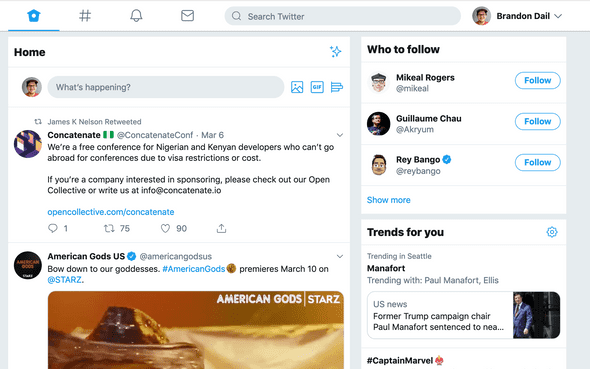 It’s immediately clear that there are distinct sections and features on the page. The main timeline for tweets, the follower recommendations, the trends section, and the navigation bar. The layout and styling of these sections even indicate there’s a division between the sections which is a really good starting point: sections that are visually independent are likely independent features which are exactly where you want your error boundaries.

If a component in one of these sections throws it seems fair to say that the other sections shouldn’t also crash. For example, if the follow button in the follower recommendations section crashes it shouldn’t also take down the main timeline.

A Recursive Line of Questioning

UIs are often recursive. At the page-level you have these big sections like sidebars and timelines, but then inside those sections you also have sub-sections like headers and lists, which contain other sections, and so on.

When identifying the right place for error boundaries a good question to ask yourself is “how should an error in this component affect its siblings?”. In the <CheckoutForm /> example this is exactly the question we considered: if CreditCardInput failed, how should that affect CheckoutButton and CardDescription?

By recursively applying this line of questioning to your component tree you can quickly identify where your feature boundaries are and put error boundaries around them.

Let’s use Twitter as an example again, to see how this would work. We’ll start at the top and then drill down into the follower recommendation section.

This analysis contains no small part opinion and bias based on my perception of these features work and how I’d expect them to work. It’s not meant to be the “correct” answer, we just want to get a feel for the process itself. 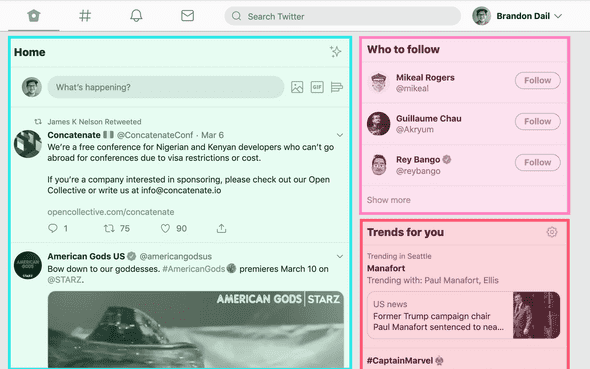 Starting at the top we can identify three main content sections: Home, Trends for you, and Who to follow. Let’s drill into the Who to follow section.

We start by asking ourselves:

How should an error in this component affect its siblings?

We can make this question a little more concrete by rephrasing it as:

If this component was to crash, should it’s siblings also crash?

So when considering Who to follow we ask: if the Who to Follow section crashed, should the Home and Trends sections also crash?. I think this is a clear case where they shouldn’t. The other sections don’t seem to rely on each other, so this is a great place to put an error boundary.

Now we apply this same line of questioning to the Who to Follow section as well. 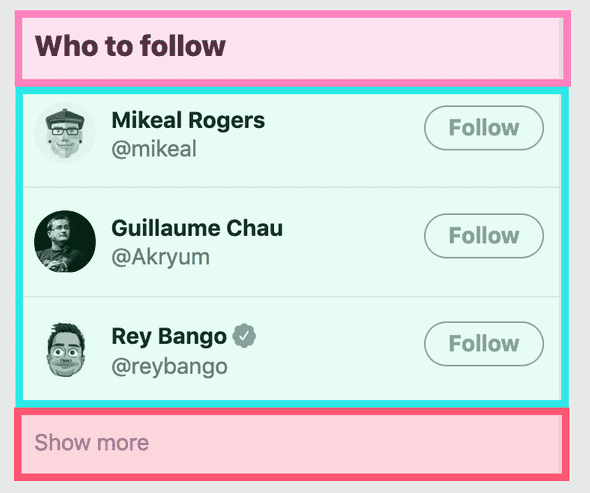 With the focus on Who to Follow we see three obvious sections: The title, the list of users to follow, and the show more button. Drilling into the list of users we again ask ourselves the same question: if the list of followers was to crash, should the title and “show more” button also crash?. In this case it’s a little less obvious but I think they probably shouldn’t. Keeping the title around doesn’t really hurt anything and the “Show more” button links to another page which itself might be working. So the answer again yes, let’s add another error boundary!

Let’s do it one more time, looking at of the follower recommendations:

There are only two sections here so we can just ask: if the user’s name and handle were to crash, should the Follow button also crash and vice-versa?

In this case I feel like the answer is yes! If the user’s name and handle were gone, we wouldn’t know who we were following. If the Follow button was gone it could be frustrating to get a recommendation without any sort of action.

Now that we know a little more about using error boundaries and fault tolerance, I want to share one of my favorite parts about this whole thing: how you can testing this all out. The best, low-effort way I’ve found to test your application’s fault tolerance is to just go in and manually break things.

This is something that I’ve started doing with every new component I add and it’s been really helpful to see how our applications handle failure. Just make sure you don’t commit any of those throw statements 🙂

Intentionally throwing errors to test fault tolerance is a very mild example of chaos engineering. I’d love to see more utilities in the React community around this concept.

What if we had something like React.ChaosMode that let you test fault tolerance by randomly breaking some component(s)?

So this is all mostly a long winded way of saying you should: